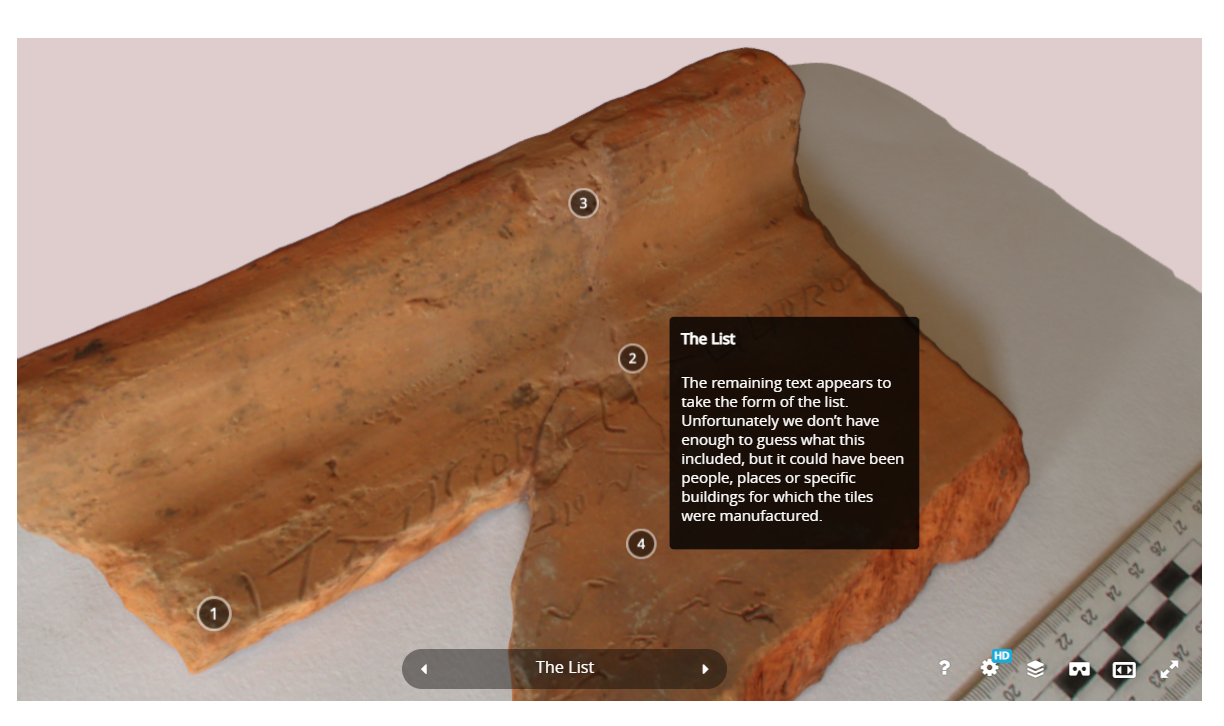 Not only does this tile contain the most important piece of graffiti recovered from Tripontium, historically speaking, it is probably the most important object that was found during the excavations. The written inscription on the tile is remarkable, but even more surprising was the method of recovery and how the significance of this very unassuming object was revealed.

This artefact is part of a larger tegula (roof tile) which originally measured approximately 400 X 320 mm. It is composed of two fragments, plus a possible third fragment, that were found in different parts of the excavation of the mansio building over a period of several months in the 1970s. Given the huge number of fragments unearthed from the mansio at that time, it is a miracle that these pieces were reunited. It would be even more amazing if some more of the missing pieces could be found.

This reassembled tile was sent to Oxford University academic Dr Roger Tomlin for his expert opinion about the inscription.

Prior to the discovery of this tile the pre-Roman tribe living in what is now Leicestershire and Warwickshire was thought to be called the Coritani. The tribe’s name had been determined by study of work by Roman and early medieval scholars and was not well supported by evidence. Roger Tomlin referred to Ptolemy’s Geography, published in about AD 150, in which the tribe was recorded as the Coritavi, and the Ravenna Cosmography, compiled by monks in the early eighth century, in which the tribal capital was Ratae Corion.

Tomlin argued that this inscription was a local contemporary source of knowledge about the name of the tribe, which should be more reliable than either Ptolemy or the Cosmography. Allowing for mistakes in vulgar Latin grammar, he interpreted the Cosmography spelling to say, in classical Latin,
Rat(a)e Cori ǀ elta(u)vor(um)

He further proposed that Ptolemy’s Coritavi was a variant of Corieltauvi.  Following the discovery of a similar inscription in Leicester that helped to confirm this interpretation, the tribe with Ratae (Roman Leicester) as its civitas (capital) is now known as the Corieltauvi.