This summer, Rugby Art Gallery & Museum brings the work of one of the most celebrated and influential artists of the 20th century to Warwickshire.

Louise Bourgeois (1911–2010) is a legendary figure in modern and contemporary art. A sculptor of immense distinction, her beguiling and endlessly inventive work - from monumental installations, spiders and figurative sculptures to fabric collages and drawings – received international acclaim in her lifetime. Bourgeois was the first woman to be given a sculpture retrospective at The Museum of Modern Art in New York in 1982, and the first artist to have an exhibition at Tate Modern in 2000.

ARTIST ROOMS Louise Bourgeois brings together a selection of prints, drawings and sculptures from the last twenty years of her life, a period of extraordinary creativity, alongside a small number of earlier works from her remarkable seven-decade career. Born in Paris in 1911, Bourgeois settled in New York in 1938, beginning to exhibit her works shortly afterward, and continued to make art until her death at the age of 98.

Bourgeois’ art was closely bound up with her life, and she used art-making as a way to make sense of her experiences. Her sculpture, drawing and writing are characterised by an unflinching emotional honesty, as she continually retold and reworked the memories and stories that shaped her life. With a compelling need to make and re-make, Bourgeois often tried out her ideas in several different forms, exploring the properties of materials such as carved marble, cast bronze, latex or stitched and stuffed fabric. Bourgeois’ work is both autobiographical and universal. Using a variety of materials she gives shape to themes of childhood, family, isolation, sexuality and gender identity, with a focus on the human form and emotional experience. Above all, this exhibition speaks about Bourgeois’ use of art as a way of expressing and investigating herself, her memories and experiences.

“I am not what I am, I am what I do with my hands...”
Louise Bourgeois

ARTIST ROOMS is a touring collection of international modern and contemporary art. Its national programme reaches audiences across the UK and is developed through local partnerships.  ARTIST ROOMS presents the work of individual artists in solo exhibitions. The exhibitions draw from a national collection jointly owned by Tate and National Galleries of Scotland that includes major bodies of work by international artists. ARTIST ROOMS gives young people the chance to get involved in creative projects, to discover more about art and artists, and learn new skills.

The ARTIST ROOMS programme and collection is managed by Tate and National Galleries of Scotland with the support of Art Fund, Henry Moore Foundation and using public funding by the National Lottery through Arts Council England and Creative Scotland.  Its founding collection was established through The d'Offay Donation in 2008 with the assistance of the National Heritage Memorial Fund, Art Fund and the Scottish and British Governments.

If you are inspired by this exhibition try your hand at creating your own sculpture during one of our Science of Sculpture worshops.

Children must be accompanied by an adult. Adults are free. 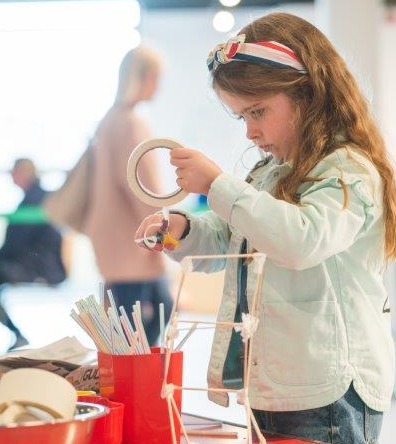